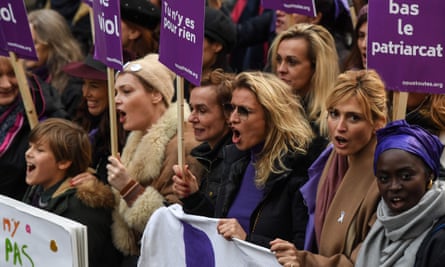 Several thousand people marched in France on Saturday to protest against alarming levels of deadly domestic violence against women, which the president, Emmanuel Macron, has called “France’s shame”.

The biggest rallies were in Paris. The streets of the capital became a sea of purple and white as thousands marched carrying banners, placards and flags calling for an end to femicide.

A total of 116 women have been murdered in France so far this year by their husband, partner or ex-partner, according to an Agence-France Presse investigation. The group “Femicides by companions or ex” meanwhile puts the toll at 137.

On average, a woman is killed in France every three days by a partner or former partner, while marital violence affects 220,000 French women every year.

While France has a progressive record on equality at work and pushes for women’s rights around the world, it has among the highest rates in Europe of domestic violence. This is thought to be down in part to the poor police response to reports of abuse. Many of the women killed this year had previously sought help from police, it has been reported.

The protest came on the UN’s International Day for the Elimination of Violence Against Women and is aimed at pressuring the government before it unveils new measures on Monday to tackle the problem.

About 30 marches have been organised throughout France. They involve nearly 70 organisations, political parties, unions and associations.

In Paris, French film and TV stars joined abuse victims and activists. The march began near the French capital’s main opera house, with several protesters holding up placards bearing the image of a relative or friend killed in gender violence.

“Break the silence, not women” read one placard. “Down with the patriarchy” read another.

“In 32 femicides, it’s Christmas” another sign read at the Paris march.

French activists have stepped up efforts this year to call attention to the problem, with an unusual campaign of glueing posters around Paris and other cities every time another woman is killed.

The posters honour the women, and call for action. Activists have also held protests, lying down on the pavement to represent the slain women.

“We think this will be a historic march,” Caroline De Haas, one of the organisers, said, adding “the level of awareness is moving at breakneck speed”.

“Our system is not working to protect these women,” the justice minister, Nicole Belloubet, recently said.

Police inaction made national headlines in France after Macron visited a hotline call centre in September and listened in on a call with a woman whose husband had threatened to kill her.

He heard a police officer on the other end tell the woman he could not help her. The hotline operator later told the French president that such responses were not unusual.

Police officers across Europe often dismiss domestic violence as a private matter and fail to intervene at crucial moments, an EU study found this year.

But France is particularly bad, according to EU researcher Albin Dearing, who led a study this year that examined domestic violence in seven European countries, including France.

“When it comes to violence against women, it showed actually that police do very little to protect women who turn to them for protection,” he said.

Some of Saturdays marchers want €1bn (£860m) in government investment, although funding is expected to fall far short of that.

“We can no longer count the number of cases where femicides could have been avoided,” the organisers said on Facebook on Saturday.

“With this march, we will make the public authorities take appropriate measures.”

How will millennial leaders change the world? Finland will give us a clue | Tulikukka de Fresnes | Opinion

New Zealand volcano: one dead and ‘likely to be more’ after eruption on White Island – live | World news