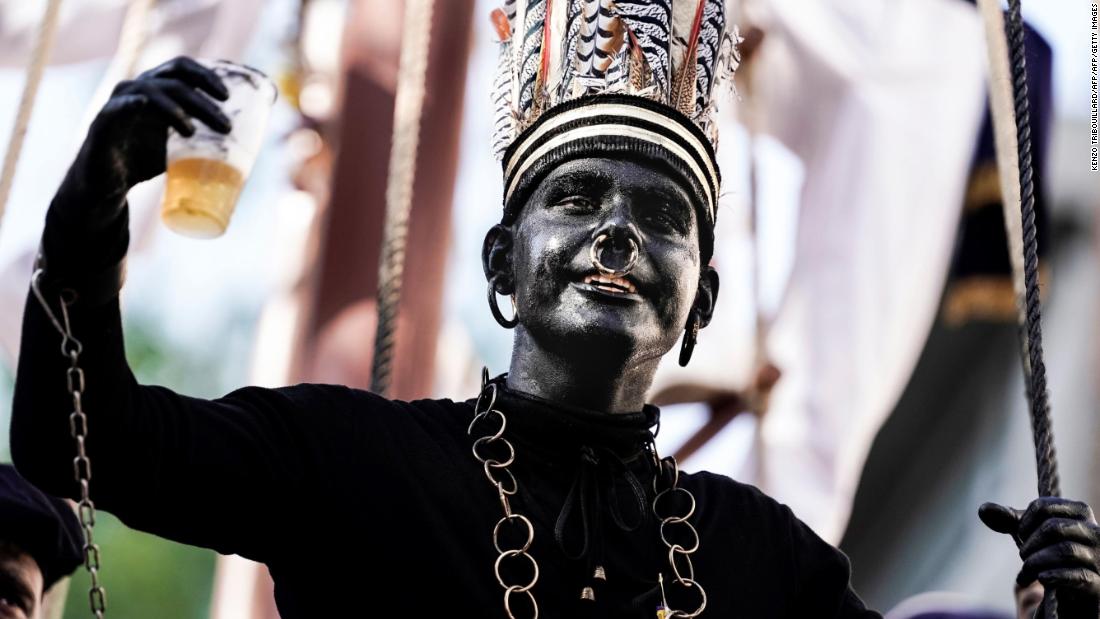 Belgium has a blackface problem. The country shares in the Black Pete tradition, albeit less enthusiastically than the Netherlands. But around Belgium, few seasons pass without folkloric festivals revolving around characters in the racist garb — and while its use has become polarizing around the world, Belgium has a casual approach to the tradition that is jarring to many outsiders.

It’s an attitude that goes back generations to Belgium’s colonial era, say experts — and a 21st century reappraisal seems some distance away.

Even those in power join in; longtime Flemish Culture Minister Sven Gatz wore blackface at an event in 2015, before responding: “Engaged against racism all my (political) life. And now I’m an ordinary racist because I colored my face dark. Come on. Love. Don’t hate.” to critics on Twitter.

Former Belgian Foreign Minister Didier Reynders even gave a TV interview while wearing blackface in 2015, attracting heat internationally but causing little damage to his career at home; earlier this year, he was the country’s nomination to become President of the European Commission.
And earlier this year, Belgium’s controversial Africa Museum — which has attempted to lead a re-education in the country about its colonial history — was condemned for allowing an Africa-themed party in its grounds, to which a guest was seen in blackface and several others in stereotypical clothing.

“You can talk about blackface in Belgium pretty much every day,” anti-racism campaigner Mouhad Reghif told CNN. “I’m tired of trying to explain to hundreds of people that blackface is racist.”

Reghif has long led a fight against Belgium’s relationship with blackface — but that battle took an ugly turn on a sweaty, stifling afternoon earlier this year.

‘I could have been really harmed’

Undeterred by a spell of oppressively hot weather, thousands of people clogged the streets of a medieval Belgian town in August. They had gathered to drink, dance and enjoy the annual folkloric parade that sweeps through Ath; a festival dating back centuries, held to commemorate the unlikely biblical victory of David against Goliath.

It’s a story Reghif felt he could relate to; but unlike the masses surrounding him, he was not there to celebrate.

Dressed in a hat and sunglasses and surrounded by plain clothed police officers, Reghif instead tried to disappear into the crowd. “I was really scared people would recognize me,” he told CNN by telephone. “If they did only part of what they’d promised me in their threats and messages, I could have been really harmed.”

The anti-racism activist was a target for one reason. He had spent much of the past year leading a high-profile and deeply controversial campaign against the parade’s central character, “The Savage” — a sinister villain, played by a white man in blackface, who appears bound by chains with a ring through his nose.

In return for his activism online, he’d received “dozens, if not hundreds” of threatening messages against himself and his daughter. “They say we rape kids, we torture sheep, we are terrorists, and we want to cancel their festival and their traditions and replace it with Islamic law, which is just crazy.”

Still, the 45-year-old activist from Brussels had traveled to see the offending character in the flesh.

He hadn’t planned to disrupt the event — he was merely there “to watch.” But before The Savage had taken center stage, the police officer ensuring Reghif’s safety received an order from the mayor’s office: get him out of Ath.

“I was escorted by the policemen back to my car,” he recalled, before being followed by officers as he drove into the next major town. His treatment attracted international attention, thrusting the festival at Ath into the spotlight and leading to anger over its recognition by UNESCO.

For Reghif and many of his fellow anti-racism campaigners, that recognition had been a long time coming. Several regional celebrations use characters in blackface, which are usually depicted as shadowy antagonists.

Ath’s was not the first festival he’d campaigned against for using characters in face paint, he told CNN, and it likely won’t be the last.

The prevalence of blackface is surprising in a country whose biggest city is the de facto capital of the European Union and home to one of Europe’s most diverse populations.

But in Belgium, experts say, blackface is one of many holdovers from the country’s colonial period.

“Belgians still have a colonial mindset,” said Reghif. “They do not face their colonial history … they don’t talk about the millions of dead by Leopold II.”

The era of Belgium’s King Leopold II is remembered far more clearly in what was then called the Congo Free State, a rubber and ivory-rich region in central Africa ruled personally, and brutally, by the monarch who was eager to exploit Africa’s wealth. Leopold ruled between 1885 and 1908 before it was then taken over by the Belgian state until 1960.

“The cruelties imposed on African laborers to force them to collect rubber beggar the imagination,” explained historian Matthew Stanard of Berry College in the United States, who has authored works on the period and its remembrance in Belgium. He noted one particularly gruesome example — the “accounting system” known as “mains coupees,” in which officers would sever and turn in a hand of a victim to keep track of those they had killed.

In total, it is estimated that millions died under Leopold II’s rule.

But back home, even after the end of its empire in the 1960s, “imperial propaganda had long-term effects,” Stanard said. Belgians continued to see central Africans as “exotic, backwards and uncivilized,” he noted — while “memories (of colonialism) have stayed generally positive … and Leopold II was completely rehabilitated after the end of the colonial era.”

With no offer of visas, very few Congolese people came to Belgium until far more recently, he added — so while the country became home to people from a number of European nations, colonial sentiments towards African cultures was never shaken off.

“A lot of Belgians who wear blackface … they don’t realize how much it would be hurting or insulting somebody, because they don’t know anybody who’s of African descent,” said Stanard.

“The colonial era is when all those blackface traditions appeared,” added Laura Nsengiyumva, a Belgian-Rwandan artist, activist and professor who has examined the country’s imperial hangover through her work.

“For the white Belgian citizen, there is no access to this knowledge about what happened there,” she said, noting that the Congo Free State is barely touched on in most school curricula. “It keeps people unaware and very sensitive to their traditions.”

“My students at university are 20 years old and that’s the first time they hear about any of this,” she added. “How can you talk about Belgium without that?”

The United Nations has asked the same question. In February, a group of UN experts visited the country to investigate the role its imperial history plays today.

The group was “concerned that primary and secondary school curricula do not adequately reflect the history of colonization,” it noted in a report, suggesting that one in four Belgian school students is unaware the Congo was even a colony.

“Where curriculum exists, it appears to recapitulate colonial propaganda,” the report added — focusing on Belgium’s supposed role in modernizing the Congo, and ignoring its atrocities.

It also found what many others find in the country: the use of blackface.

‘You’re there, but you don’t exist’

One institution finds itself at the center of the storm about Belgian colonial memory — the country’s controversial Africa Museum.

The site, which attempted to shake off a decades-long reputation of being outdated and offensive with an expensive refurbishment, re-opened last year.

But the unveiling of the new, more “critical” iteration was overshadowed by protests and a demand from the President of the DRC that it returns artifacts plundered from the country during the colonial era.
Criticism only intensified in August when a partygoer wore blackface to an event on its grounds, for which the museum apologized.

“Our museum is the most visible symbol of the colonial past of Belgium,” its director Guido Gryseels told CNN. “We’re in the middle of that debate.

“Some people want us to take a much more activist role, for example in condemning Leopold II. (But) we see ourselves as a forum for debate … you leave it up to the visitors to make their own minds.”

Gryseels recognized that “the majority of young people know very little about colonial past,” and as a result, “any change in cultural tradition” does not come without some opposition. “When I grew up I didn’t know a single person in the area that was of another origin,” he noted.

But he dismissed the suggestion that blackface is commonplace in Belgium, suggesting that “there is racism in the country but it’s by and large so uncommon.”

That’s a view rejected by Nsengiyumva, who served as an adviser for the museum before its re-opening but has been critical of the institution since.

“There is a lot of prejudice, but it’s even more dangerous because you don’t see it,” she said, pointing to inequality in housing, employment opportunities and other social areas.

Her complaints have been made frequently by black and minority ethnic people in Belgium, and were supported by a study earlier this year by Brussels Observatory for Employment and Training — which found that the unemployment rate among people with African origin was around three times higher than white European candidates in Brussels.

“The structural inequality in the jobs market with respect to origin is significant,” said Khadija Sanhadi, who led the study, according to The Bulletin.

Reghif said trends like those have a profound impact. “It’s a social death — you are there, but you don’t exist,” he said.

And for Nsengiyumva, blackface in particularly can make that experience more painful.

“You had this idea that blackness and violence were related — that’s the same idea as seen in The Savage of Ath,” she said. “It’s really like an education to racism … for white kids to see their black comrades as violent, as dirty, in negative ways.

“Because it’s folklore, because it’s tradition for kids, people think it’s innocent,” she concluded. “But it’s not innocent.”

How a Killing at a Caribbean Resort Became an International Incident

Fuel and sewage force family out of Ceredigion home

Supreme Court confronts whether homeless can sleep on sidewalks