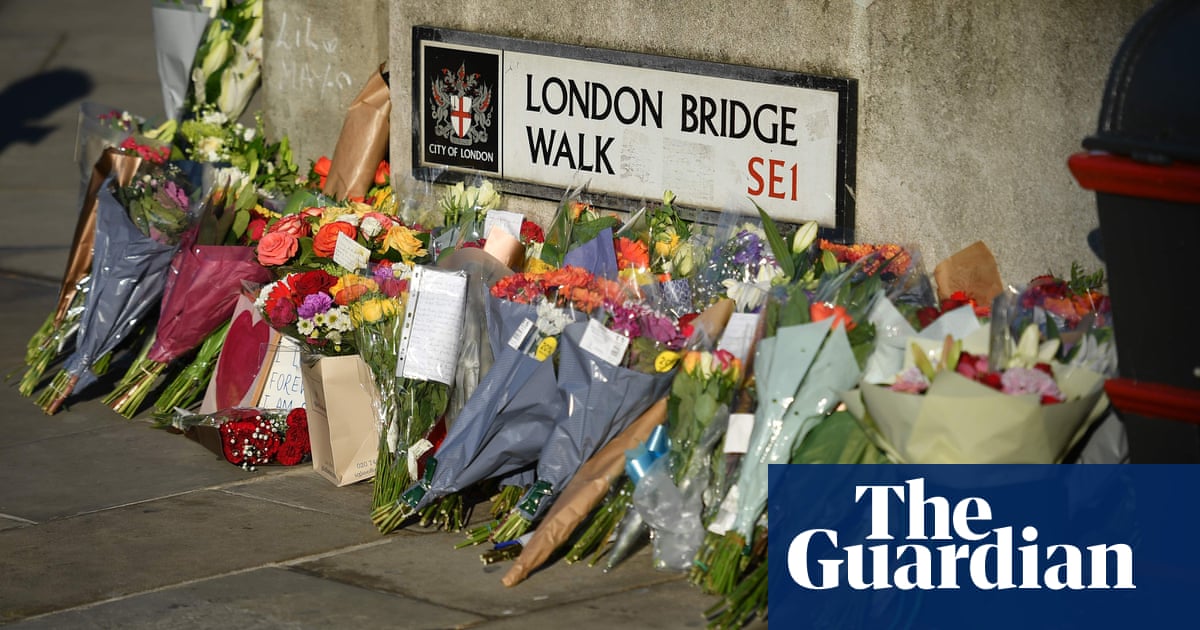 Prison and probation officers, convicted criminals, criminologists and penal reformers had gathered in the chandeliered court drawing room of the Fishmongers’ Hall in the City of London to talk about the power of rehabilitation when they heard shouts from lower in the building.

The man who caused them was Usman Khan, a 28-year old delegate from Staffordshire who was released from prison last year after pleading guilty in 2012 to offences including planning to create a terrorist training camp in Kashmir. He had attended the morning session of Cambridge University’s Learning Together conference, which had explored the importance of storytelling and creative writing in reforming criminals. It was a thoughtful scene in grand surroundings watched over by a celebrated portrait of the Queen.

Bryonn Bain, an American playwright and prison activist, had just left delegates with the inspiring thought that “without vulnerability there is no courage” when Khan made his transformation from delegate to killer. Jack Merritt, 25, a course coordinator and Cambridge graduate, went to investigate the shouts and was the first person to confront Khan at the door, Bain said on Monday.

Khan launched a lethal attack slashing and stabbing with a pair of knives, at least one of which was taped to his wrist. Under his jacket he had a fake bomb vest and he reportedly threatened to blow up the building. He killed Merritt, who Bain said was “the first line of defence” and was brave. He also killed Saskia Jones, 23, another Cambridge graduate who was volunteering for the project.

Bain told the BBC he went to investigate too. “I saw people die,” he said. “I saw things I am never going to be able to unsee.”

Among those who responded first were some of the ex-offenders, said Cambridge University, which runs the programme.

They managed to get Khan away from the main conference area. The screams from the attack were heard in the basement, where a Polish kitchen porter, Łukasz, was cleaning glasses, according to Commodore Toby Williamson, the clerk of the City of London livery society, who gave a detailed account of the attack on Monday.

“The scream is so loud that as a first aider he makes a choice,” he said. “He goes towards the trouble on the first floor of the building and it’s pretty clear there’s a bad guy. He’s got two knives in his hands, there is blood, there is screaming, there is chaos. Łukasz pulls off the wall this long stick, he charges towards the bad guy and impacts him on the chest and there’s clearly something here that is protective and it doesn’t make any sort of impact. But he is buying time. He allows others to escape to adjacent rooms.

“He has about a one-minute one-on-one straight combat,” said Williamson. “This guy, we now know by the name of Khan, he works his way up Łukasz’s pole, slashing with his knife. He takes five wounds to his left side.”

By Williamson’s account, Łukasz bought time for two delegates to get involved, one of them understood to be Marc Conway, an ex-offender at the conference.

“They come and join the fight and it’s pretty gruesome,” said Williamson. “I think the terrorist decided he was outnumbered. He runs for it. He goes down the main staircase and the next bit of hell is at reception. He can’t get out the front door.

“Our guy called Gareth, who is the reception doorman, is pushing the door shut as good as he can so that Dawn, a yard behind, can get on the telephones, hit the alarms – exactly as her training has told her to do.”

There was a “great showdown in the entrance hall” involving Andy, a maintenance man, “a Ministry of Defence ex-policeman and pretty cool customer”, who had to weigh up whether to let Khan out on to the street.

“He makes exactly the right choice,” said Williamson. “The doors opened. Out the terrorist falls and the first one after him is Łukasz shouting at everyone to get out of the way, get back. But I tell you what, members of the public, they just don’t do that nowadays. They do what they needed to do. They join in … Łukasz is losing strength on his left side at this point but I tell you what, his job is done.”

Another who chased Khan as he ran southwards over London Bridge was James Ford, who was jailed for life in April 2004 for the murder of Amanda Champion, a 21-year-old woman with learning difficulties.

Other members of the public also joined the fray, including Thomas Gray, 24, a Mini driver for a tour based on the film The Italian Job. Khan was pulled to the ground as one man sprayed him with a fire extinguisher.

“I saw that he had a knife in each hand so I decided to stamp on his left wrist as hard as I could to try to free one of the knives off as it appeared to be taped to his hand,” said Gray. “The only thing that we heard from the suspect was ‘get off of me’. The overall resounding message from the chaps involved was that it’s not going to happen. We just kind of held him there and did what we could until the police arrived. I grew up on rugby and the mentality, be that on the pitch or off the pitch, is it’s one in, it’s all in.

“I saw that something was going on, so originally, before even knowing what the incident was, I wanted to separate the incident and make sure someone wasn’t getting beaten to a pulp. While I was there and then realised what was going on, I was kind of like, ‘I can’t run away now, I’ve got to stick it out and help out as best I can.’”

With armed City of London police officers on the scene, Khan was surrounded. One police officer could be heard shouting: “He’s got a bomb, mind your backs!”

The men quickly stepped back and the officer shouted at Khan: “Do not move!”

Shortly afterwards Bain, by now well away from the scene, took a moment to compose a tweet: “Bomber is dead. Shot by London special forces. Another killed. Two injured. Evacuating to a survivors’ center. I’m ok. Be grateful for every day.”