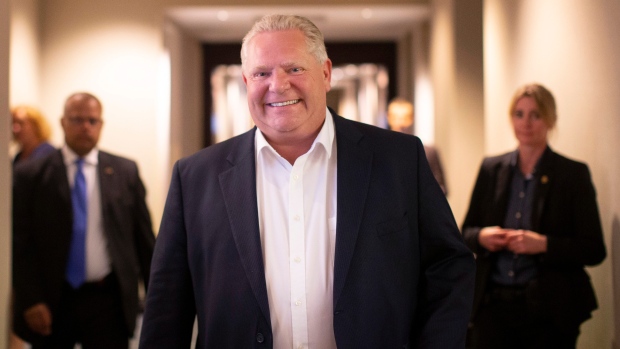 Ontario Premier Doug Ford said he’s going to do his best to quell the tensions between Ottawa and the Prairie provinces — but he stopped short of calling himself a unifier.

“I don’t know if I’d call myself a unifier, but I’ll tell you, I’m going to do the best I can to cool the waters,” Doug Ford told host Joyce Napier during a CTV Power Play interview that aired Monday.

“I have a great relationship with all the premiers.”

The comment comes one year after Ford appeared alongside Conservative Leader Andrew Scheer and other Conservative premiers on the cover of Maclean’s magazine. The men were labelled “The Resistance,” a nod to their opposition to key policies coming from Ottawa, including the carbon tax.

While Ford has adopted a new conciliatory tone, not all of the other premiers have followed suit. Saskatchewan Premier Scott Moe walked out of a meeting with Trudeau last week and called it “disappointing.”

Ford told Napier he understands the frustrations coming from Alberta and Saskatchewan, where the federal Liberals failed to elect a single MP.

“Anyone that’s been out there — it’s real. You go downtown in Calgary and you see a lot of vacant, empty buildings there,” said Ford.

He said he had a piece of advice for Trudeau as he navigates the tensions with the Prairies – adding that he passed this tidbit along to the prime minister during their meeting last week.

“It’s absolutely essential he listens to the people out West,” Ford said.

Ford warned that the fractures in Canada’s confederation could hurt the country on the global stage, where prospective investors might view the tensions within Canada as a source of uncertainty – and subsequently look to spend their money elsewhere.

“We have to send the world the message of certainty. Nothing scares businesses and economic development away from regions or countries than a country not being stable, divided,” said Ford.

“As much as we may have differences within province to province, we have to send a united message out to the rest of the world.”

He added that he’ll be spreading this gospel of unity at a meeting with the other premiers on Dec. 2.

However, when pressed on whether fractious issues like equalization or pipelines would be raised during the meeting, Ford kept mum – except to say that he’d like to see a pipeline snake its way through Ontario to greet the refinery out East.

“I’ve always been in favour of a pipeline going through Ontario,” Ford said. “We do have the largest refinery in the country out in New Brunswick.”

Ford also extended an invitation to Canadians from other provinces who are struggling to find work, saying they are welcome to come to Ontario where things are “absolutely booming.”

“I need more people. Anyone who doesn’t have a job in Canada, come to Ontario. We need you – skilled or unskilled,” said Ford.

BBC Question Time: Labour MP pulls out of show and is replaced by female colleague amid complaints of all-male panel