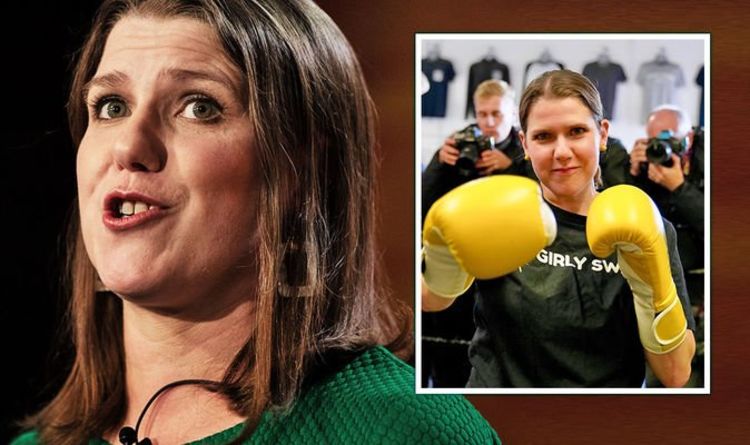 Ms Swinson has been moaning for the past week after she was snubbed to join the ITV Leaders Debate on Tuesday. That debate featured Conservative leader Boris Johnson and Labour leader Jeremy Corbyn. Ms Swinson’s Lib Dems are the fourth biggest party with a meagre 20 seats.

Of those, only 12 were won at the last general election.

But Ms Swinson sparked fury online after posting about her appearance on the BBC Question Time leaders debate tonight.

She wrote on Twitter: “Tune into Question Time tomorrow night as the other leaders finally go up against a #GirlySwot.”

The comment was accompanied by a picture of Ms Swinson in a pair of yellow boxing gloves.

She appeared inside a ring with supposed paparazzi snapping pictures of the leader.

One wrote: “Isn’t it rather insulting that the party leaders think it’s acceptable to pose in a boxing ring.

“Just copying each other.”

“Guess those are pretty good for the environment and also kill millions of people too.”

A fourth responded: “What is a girly swot? Apart from some self titled right wing over ambitious underachieving opportunist.

“It’s not a thing really just a smoke screen soundbite that has no meaning, ah I get it now.”

He was doing a round with British heavyweight boxer Dereck Chisora.

It will be the first Leaders Debate since the ITV programme on Tuesday.

It will start at 7pm and run for two hours.

Scientists have trained this piece of plastic to ‘walk’