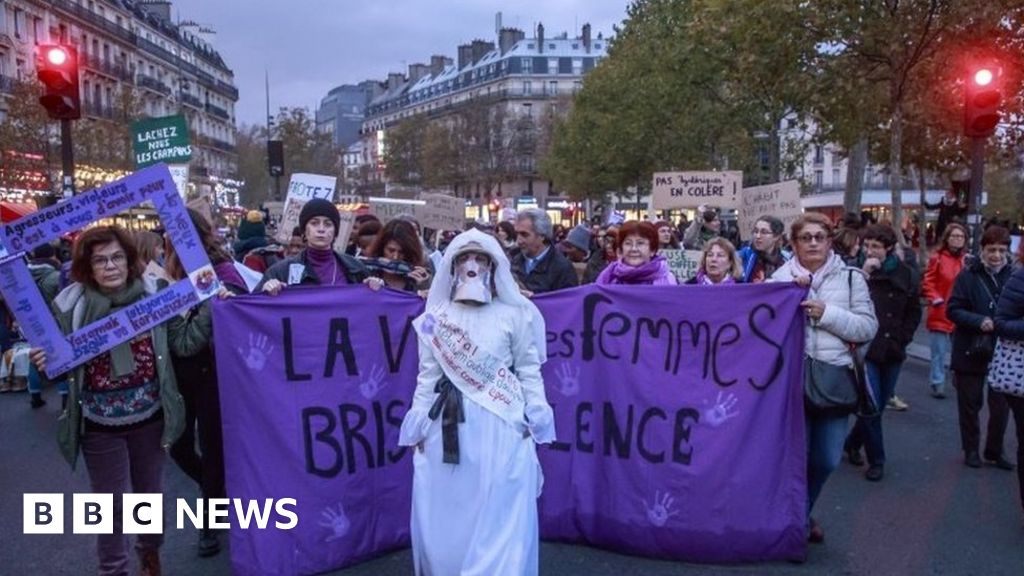 Marches have been held in dozens of French cities to condemn femicide and other forms of gender-based violence.

Using the hashtag #NousToutes (All of Us), protesters accuse the authorities of turning a blind eye to the problem.

Measures to tackle domestic violence are expected to be unveiled on Monday.

France has one of the highest rates of murders linked to domestic violence in Western Europe, with at least 115 women killed by their partners or ex-partners this year alone, local media say.

About 30 street marches were organised by a number of groups and unions throughout France.

In Paris, the rally began near the Opéra in the capital’s centre.

The city soon became a sea of purple – the colour of thousands of banners carried by protesters.

“We think this will be a historic march,” Caroline De Haas, one of the organisers, was quoted as saying by AFP news agency.

She said “the level of awareness [about the problem] is moving at breakneck speed”.

Rallies are also being held in other major cities.

In the southern port of Marseille, demonstrators held placards with the names of some of the victims of domestic violence.

One woman is killed in France every three days by their current or former partner, according to the AFP.

Eurostat, the European Union’s statistics agency, says there were 123 murders committed by a partner in France in 2017.

The marches come at the end of nearly three months of consultations launched by the French government.

Campaigners hope the talks will result in a set of specific measures against domestic violence.

In September, the government announced a number of emergency measures, including the creation of 1,000 shelter places and emergency accommodation from next year, and an audit of 400 police stations to see how women’s complaints are handled.

Prime Minister Edouard Philippe also said €5m (£4.5m) would be released in the fight against femicide, and that the complaints procedure would be simplified, that the protection of women under threat would be improved, and that their partners would be removed more quickly.

The PM also floated the idea that those convicted of domestic violence or under a restraining order would have to wear an electronic bracelet to protect women from further violence.

GPs vote to cut home visits from their core work