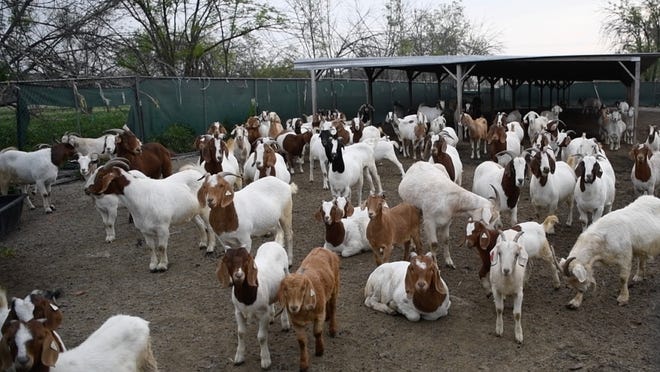 TITUSVILLE, Fla. — For more than 20 years, the only ones to really step foot in the overgrown reservoir on the east side of Imperial Estates Elementary in Titusville have been a family of gopher tortoises.

Rough terrain has made clearing and maintaining the dry pond bed dangerous for human service crews, and the tortoises, a protected species under Florida law, only complicate the issue.

To tame the wild acre, the Brevard School District has hit on a creative solution: a crack squad of bramble-munching goats.

“This is a perfect fit, because we really couldn’t get in there with other types of equipment,” said the district’s facilities chief, Assistant Superintendent Sue Hann.

Starting Dec. 3, about two dozen of the hungry animals will bite back the problem shrubs in an effort to clear the unruly plot, which abuts a basketball court and puts students at risk of close encounters with snakes and other critters.

The goats — on loan from the South Central Florida franchise of Rent-a-Ruminant, a national company that specializes in landscaping livestock — are an elegant solution to a dicey problem, said grounds services supervisor Matt Nolle and Jim Ross, Brevard Public Schools’ director of operations and maintenance.

The area around the pond is too dangerous for tractors and other heavy equipment, Nolle said.

“Very steep banks, vertical drop-offs in some spots. Even putting a guy on foot in there would be hazardous,” he said.

Not to mention the expense and hassle of removing the gopher tortoises, Ross said, which must be done by law prior to conventional ground clearing and requires a special permit.

Goats are gentler on the environment, eliminate the need for hazardous chemicals and are able get into places human crews just can’t, Nolle said.

“Somehow, four legs is an advantage,” he said.

The animals will be housed in a special trailer at the school for about two weeks to complete the job, at a total cost of about $4,500, Nolle said.

The idea came about after drastic staffing cuts following the district’s 2013 decision to consolidate its groundskeeping services led to overgrown playgrounds and athletic fields.

“As we kind of embarked on that whole process, we learned that goats are not for mowing. They’re more for clearing overgrown vegetation,” Hann said.

One of the issues raised at the time was the possible health risks of putting children in close contact with goat droppings. That’s not a concern here, with the goats being contained behind the high fence surrounding the reservoir, she said.

The risk of run-off also is low due to relatively dry weather and the sandy, porous ground around the pond, Nolle said.

Authorities have successfully used goats as an eco-friendly and cost-effective alternative to clear flammable scrub in California, where they were credited with saving the Ronald Reagan Presidential Library from a wildfire that burned nearly 1,700 acres near Los Angeles this month.