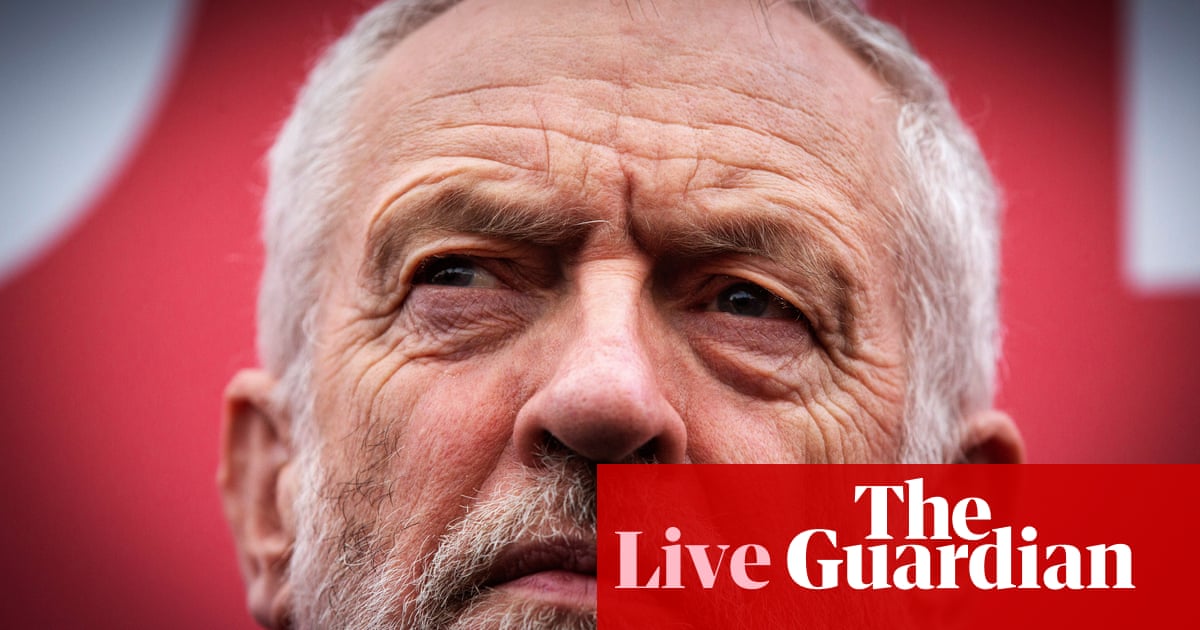 How Jeremy Corbyn would vote in a second referendum on Brexit “doesn’t matter”, according to Angela Raynor.

She had been asked what side of the debate her party leader would be on in a future vote – as Labour eventually pledged.


Jeremy stands on the side of the people. We’ve had three years of the Conservatives propped up with the DUP who have failed to get a deal on Europe. We’ve said that we will get a deal that will put jobs, the economy, consumers, the environment, and employment protections first, within six months of a Labour government.

We’ll put that back to the people in a vote. For that deal or Remain. Then we’ll do the investment in Britain that we need. That’s the important thing, that people understand that we’re respecting that they have the final say. It doesn’t matter how Jeremy Corbyn votes, it matters what he’s going to do for the people of this country.

She said that far too many people were paying huge amounts of money to privately let former council homes, with families dependent on council contributions due to the exorbitant rents.

“[We need to make sure we have the council housing stock we need for the people and families who are struggling at the moment to meet housing demands,” she said, adding that homes would primarily be built on brownfield, public sector land while protecting greenbelts,


Its not just about how many units we build, but actually that we build communities again. If you remember the council houses of the past, I grew up on a council estate and now its considered posh if you’ve got a council house because its so hard to get one. But actually those council estates had green fields where kids could play, we had parks where people could go and have leisure. Our programme will make sure people can live healthy green lives as well as making sure they’ve got the houses that are energy efficient, fit for the 21st century.

Raynor said that a house building plan in 1945 transformed communities and rapidly increased the number of social homes, and Labour would emulate that if elected.

Questioned on the home-building legacy of the Blair governments, Raynor said Labour had to now go back to its fundamental values –away from right-to-buy schemes and so-called affordable housing.


When I was a young mum at 16 I was lucky enough to get a council house, many young people today are not in that position. And many families watching your programme are in substandard accommodation paying huge amounts of money for it, no chance of ever getting on the property ladder and are really frustrated they can’t get their young ones a home near to them.

‘We want everyone to be better off’, says Javid

The Chancellor is making a concerted attempt to appeal to lower earners in this interview, with soundbites and numbers galore.


I want everyone to be better off. If you are asking me about taxes, we don’t intend to plan to increase taxes. We plan to cut taxes for working people, with the tax cuts they’ll be better off. If you are someone who hadn’t even quite reached that wage … you [the interviewer] chose an average wage, there are many people today still on lower incomes than that and that’s why we’ve set out our proposals to increase the National Living Wage.

The former banker said that since the Tories raised the minimum amount you could be paid, people had seen a £2,000 increase to their annual pay packets.

“With our new plans by 2023 thats a pay rise of £4,000. We want everyone to be better off, but our focus is going to be on working people … And trying to help them the most.”

Javid said that people would be better off in a Tory-majority post-Brexit government. “We’re the only party which is going to support businesses,” he claimed.

Asked how much the Duke of York will be missed from public life, given his work helping to create new skilled jobs and stimulating economic growth through entrepreneurial scheme [email protected]:


When you mention him, the first thought that comes to my mind is the many victims of Mr Epstein, that is foremost in my mind and everything should be done that can possibly be done to help those victims. The Prince’s statement yesterday speaks for itself, I think its the right decision and the last thing on my mind would be the value of his public duties at this point.

Sajid Javid, the Chancellor, is on BBC Breakfast elaborating on the Tories’ plans to raise the threshold which lower earners begin to pay national insurance contributions.

A Conservative-majority government would cut taxes for working people by raising the national insurance to £9,500 in the first year, before seeking to raise it to £12,500 throughout their possible term in office. The current threshold is £8,632.


We’ve shown this since we’ve been back in office, that hard working people should be able to keep more of their hard earned cash.

Questioned over Boris Johnson’s claim that the initial threshold rise would immediately put £500 in every person’s pocket, Javid restated the policy without directly responding before he was pressed further.


We’ve been very clear, as soon as the prime minister had finished answering a very straightforward answer to a very good question from a young woman in Teesside where he was at the business, he set out what the plans were and since then we’ve set out in far more detail how it is going to work.

Once the threshold reaches £12,500, people will be saving £500 each – but that figure only remains an intention at this stage.

Johnson was in Teesside yesterday, where he appeared to disclose details about the policy prematurely.

The PM may selling this election as all about Brexit, but the apparently marginal issue of animal rights could yet prove surprisingly influential, writes the Guardian’s Patrick Barkham.

While Extinction Rebellion and the youth climate strikes have turned the climate crisis into a popular priority, Barkham says the Conservatives hope to harvest this sentiment by championing animals, after former environment secretary Michael Gove demonstrated how animal welfare action such as the ban on all ivory trade were financially painless “easy wins”.

YouGov polling commissioned by the League Against Cruel Sports has found that strengthening the 2004 Hunting Act to prevent the killing of foxes via trail hunting has the support of not only 89% of potential Labour voters but also 68% of Conservatives and 71% of Brexit party supporters.

So don’t rule out a pivot towards animal rights … possibly partly inspired by the PM’s partner, Carrie Symonds, who has worked for international charity Oceana, championed anti-whaling causes, and who also made a surprise appearance at this summer’s Birdfair, dubbed “the conservationists’ Glastonbury”.

In case you missed it, Jo Swinson launched the Liberal Democrat’s election manifesto yesterday. You can catch up on the key policies here, including:

You can read the Guardian’s fact check on the party’s claim that there will be a £50bn “remain bonus” from revoking Brexit.

As usual you can read plenty of Guardian opinion pieces today, including Owen Jones on why Jeremy Corbyn must convince voters under 40 that Labour’s manifesto is worth voting for, or Johnson will triumph.

There’s also Martin Kettle on why it’s time for tactical voting in this election. He says it is right for voters to cast their ballot for the candidate with the best chance of beating the Conservatives: “This is not a time for political piety, prissiness or pride. It’s about facing the Brexit danger – and taking the one real chance of preventing it.”

The Conservatives haven’t officially unveiled their manifesto yet, but Boris Johnson let a fairly large cat out of the bag yesterday when he revealed plans to raise the threshold at which people start paying National Insurance contributions from £8,628 a year to £9,500 – eventually rising to £12,500.

And the party pushing this policy this morning, tweeting in the past hour about the PM’s support for people on low and middle incomes being able to “keep more of their hard-earned money”.

Back to housing and the Conservatives divulge plans to build 1m extra homes over the next five years today, as well as outline measures to make it easier for renters to buy. We’ll bring you more details on that later.

What else is happening today?

Apart from Labour’s manifesto Launch, Boris Johnson is expected to be campaigning in Bedfordshire.

And not election-related but still on politics, the former Scottish first minister Alex Salmond is due to appear in court on a series of sexual assault and attempted rape charges. According to Press Association, the preliminary hearing is to take place at the High Court in Edinburgh. Salmond, 64, has previously denied the allegations and said he will defend himself “to the utmost” in court.

Good morning and welcome to all things politics for today. I’m Alison Rourke and I will be guiding you through the first hour or so of today’s coverage. So let’s get into it.

The big set-piece event of the day is Jeremy Corbyn launching Labour’s manifesto in Birmingham this morning. Its centrepiece is the party’s big promise on social housing … to the tune of £75bn in a promise to “build for the many”.

Corbyn will pledge to be “on your side”, including promising to build 100,000 council houses a year and 50,000 social homes through housing associations by the end of its first term. That’s a massive jump from the 6,287 council homes built in 2018-19.

No doubt Labour hopes this pitch will appeal to the almost 1.6m families raising children in rented homes.

And how will the pledge it be paid for? The money is earmarked to come out of the recently announced £150bn “social transformation fund”.

You can see the Guardian’s fact check on whether the numbers stack up here.

(Not to be outdone on housing, the Tories will announce their “fairer deal for renters” today, so stay tuned for that.)

Another big set piece in the manifesto is Labour’s promise to create a million green jobs to tackle the climate crisis. New jobs will be promised in insulation upgrade projects, offshore wind and carbon capture developments. As the Guardian’s Kate Proctor writes: “The focus on tackling climate change while also supporting mass job creation is likely to be a resolution of tension between ambitious de-carbonisation targets set by Labour activists at the autumn party conference and union concerns about job losses.”

According to the Press Association, the manifesto will also include plans to renationalise key utilities, following a pledge to take part of BT into public ownership to deliver free full-fibre broadband for all, as well as promises to significantly boost NHS spending.

So stay tuned for a day of announcements.