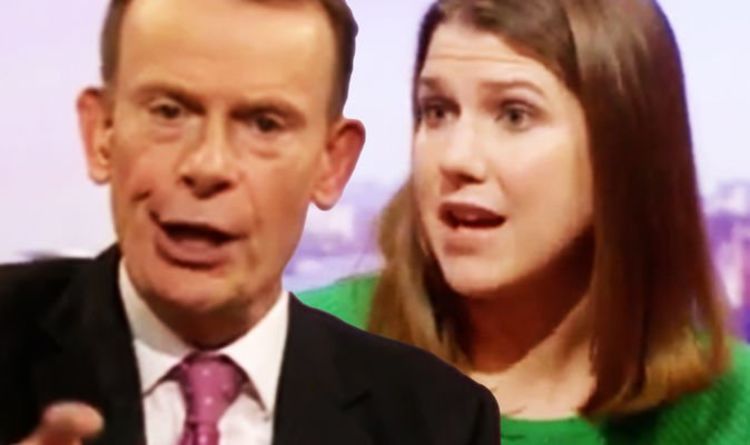 Andrew Marr ridiculed Jo Swinson during the car-crash interview on the BBC this morning. The Liberal Democrat leader has endured a bruising week on the campaign trail, after she was left humiliated by the leader’s Question Time on Friday. Marr said that the Question Time show on Friday night showed that there was still a lot of anger towards the Liberal Democrats from “lefty-leaning, remain-voters”.

She has also seen her party squeezed in the polls by both Labour.

Marr went on to mock Ms Swinson’s claim that she could become Prime Minister by taking her 20 current MPs to win more than 300 seats.

Marr pointed out “it is just possible you won’t get a majority”.

This remark was described as “brutal” by viewers on social media.

Marr began the interview, asking: “It’s not gone terribly well has it?”

Ms Swinson tried to defend herself against the attack, responding: “Well, I’m enjoying the campaign. Clearly there has been a squeeze.”

She then blamed the “the stitch-up” between Nigel Farage and the Conservatives for the Liberal Democrats polling demise.

Marr pressed Ms Swinson on why Remainers should back the Liberal Democrats over Labour, when Jeremy Corbyn is offering a Brexit referendum.

“But, the Lib Dems are the best chance to stop that. We need to make sure we win those seats from the Conservatives, and we have a better chance that Labour to do just that.”

Commentators remarked that this was evidence the Liberal Democrats were shifting its position from “Swinson could be prime minister” to “we can help deny Johnson a majority”.

She also admitted that she could back Boris Johnson’s Brexit deal in Parliament, if the Tory leader accepted a referendum with the option of his deal or remaining in the EU.

Ms Swinson said: “If there is a law in Parliament that I can vote for that makes sure that the Brexit deal is put to the public, with the option to remain, I will vote for that.”

Mark Ruffalo Is A Good Actor. Is He A Good Activist?