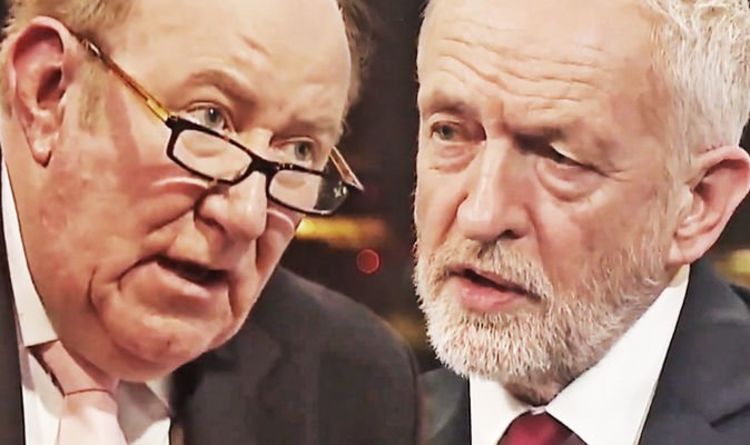 Jeremy Corbyn failed to apolgoise to the British Jewish community during an interview with BBC’s Andrew neil ahead of the Decemebr 12 general election. The topic was broughout up as the Chief Rabbi warned people against voting for the Labour Party and said that “the overwhelming majority of British Jews are gripped by anxiety”. Host Mr Neil said: “Wouldn’t you like to take this opportunity tonight to apologise to the British Jewish community for what’s happened?”

Speaking to BBC host Andrew Neil on BBC One, Mr Corbyn said: “What I’ll say is this: I am determined that our society will be safe for people of all faiths.

“I don’t want anyone to be feeling insecure in our society and our government will protect every community.”

Mr Neil interject: “So no apology?”

As Mr Corbyn continued his comment, Mr Neil said again: “So no apologisy for how you’ve handled this?”

Mr Corbyn said: “No hang on a minute, Andrew. Can I explain what we’re trying to do?”

The host said: “You have and you’ve been given plenty of time to do it.

“I asked you if you wanted to apologise and you haven’t.”

Mr Neil interrupted: “You’ve said that several times. So, we get that, I’m not arguing about that.”

Mr Corbyn continued: “Be it Islamophobia or antisemitism or any other form of racism.

“I want to work with every community to make sure it is eliminated.

“That is what my whole life has been about.”

Military Aid For Ukraine Is At The Heart Of Impeachment. Here’s What That Looks Like From The Ukrainian Front Line.