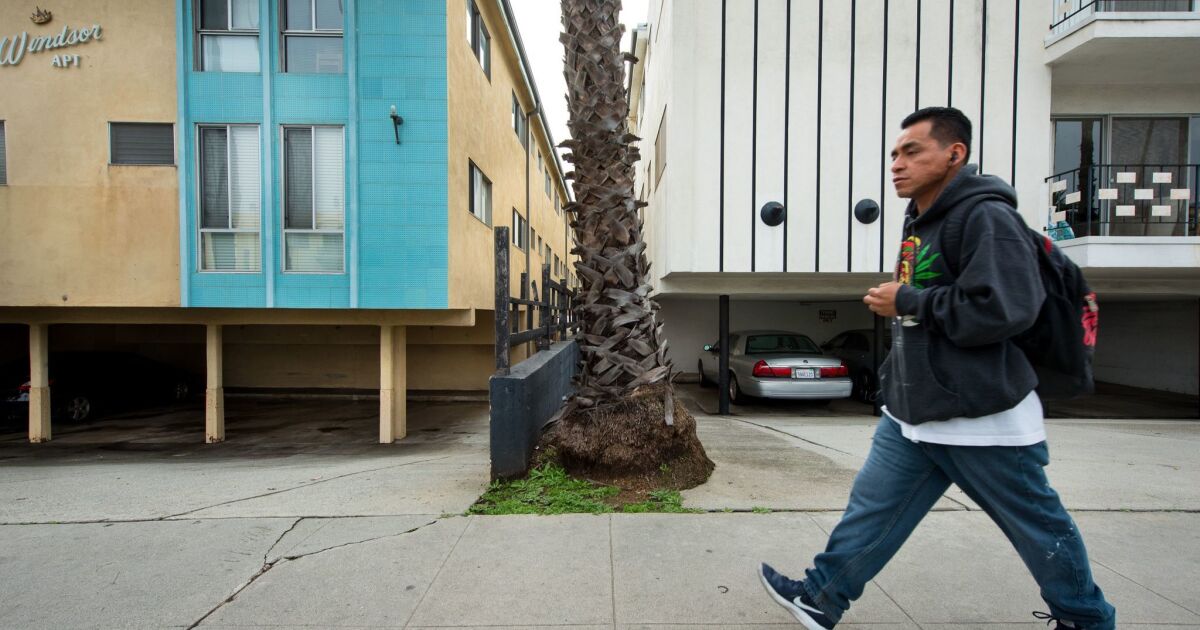 In 2016, Los Angeles launched a program to find and fix “soft-story” apartment buildings — those perched above parking spaces with little support and at risk of collapse in a major earthquake.

These apartments, which feature flimsy first floors that often serve as parking spaces, became popular after World War II as the city grew. But this type of structure has shown itself to be extremely vulnerable in the face of a violent quake: Such buildings collapsed in the 1989 Loma Prieta earthquake and the 1994 Northridge earthquake, including one apartment building where 16 people died. (Still confused about what the term “soft-story” building means? Here’s an interactive graphic.)

Two of my colleagues — earthquake expert and master of disaster Ron Lin and data reporter Jon Schleuss — have been investigating the progress made on retrofitting L.A.’s soft-story apartment buildings. They found that about a quarter of the soft-story apartment buildings identified by the city have already been retrofitted to better withstand the next earthquake. But how exactly does all of this work? And how can you check on the status of your own home?

[Read the story: “Earthquake safety revolution sweeping L.A. apartments. But how far will it go?” by Rong-Gong Lin II and Jon Schleuss in the Los Angeles Times]

Here’s how Jon and Ron explain it:

“An earthquake safety revolution is spreading along the streets and back alleys of Los Angeles, as steel frames and strong walls appear inside the first-story parking garages of thousands of apartment buildings.

“The construction is designed to fix one of the most dangerous earthquake risks: Wood apartment buildings collapsing because the skinny poles propping up parking at the ground level are not strong enough to withstand the shaking.

“Now, 27% of more than 11,000 dangerous wood-frame apartments in Los Angeles are retrofitted to better resist earthquakes. Retrofit progress has been steady across the city, a Times analysis of city records shows, with the Westside and San Fernando Valley reporting the most retrofit progress. Only the Eastside lags substantially behind the rest of the city, with about 17% of apartment buildings’ retrofit completed.”

Ron and Jon also built this incredible database for Angelenos to find out whether their home is on the soft-story apartment list, and if so, whether it’s been retrofitted. (I just entered my apartment, which I didn’t think was a soft-story, and luckily it appears to not be on the list. But the retrofitting plans for the building one over from me appear to be more than 70 days overdue.)

[Search your apartment’s status here: “Thousands of L.A.’s apartments aren’t ready for the next earthquake. Is yours?” in the Los Angeles Times]

And there’s more progress afoot — the city of Hayward, bedeviled by the Hayward fault, recently passed a law requiring mandatory earthquake evaluation of suspected wood soft-story buildings. Ron and Jon also point out in their story that Beverly Hills, Santa Monica and West Hollywood have all passed laws in recent years requiring retrofit of soft-story buildings; they were joined this year by Pasadena.

The gun used in last week’s shooting at Saugus High School was a so-called ghost gun, assembled from parts without a registration number, Los Angeles County Sheriff Alex Villanueva confirmed Thursday. Sheriff’s homicide detectives are trying to determine who built the .45-caliber handgun. Authorities say the 16-year-old gunman killed two other students and wounded several others before turning the weapon on himself. He died from his injury a day later. Los Angeles Times

President Trump may appear on California’s primary ballot without having to disclose his tax returns, the state’s highest court decided Thursday. In a unanimous ruling, the California Supreme Court said the requirement that presidential candidates must disclose their tax returns to appear on the March primary ballot violates the California Constitution. (The law requiring such disclosures, passed on a party-line vote earlier this year and signed by Gov. Gavin Newsom, did not single out Trump, but was clearly aimed at the president.) Los Angeles Times

Netflix could play a key role in the upcoming Hollywood labor drama: As Hollywood’s major unions gird for potentially contentious contract negotiations with the major studios, the streaming giant is moving to hash out its own labor deals that could give it a competitive advantage in the event of a strike. Los Angeles Times

L.A.’s aging Department of Water and Power equipment is a risk for sparking wildfires, according to an audit released by the city controller. Los Angeles Times

A troubled youth detention firm is trying to open a migrant child shelter in Los Angeles. “Sheltering migrant children would be a major new line of business for a company founded to offer last-ditch interventions for repeat juvenile offenders,” Reveal’s Aura Bogado and Patrick Michels write of the for-profit firm VisionQuest. Reveal

Your support helps us deliver the news that matters most. Subscribe to the Los Angeles Times.

IMMIGRATION AND THE BORDER

The Trump administration’s Remain in Mexico asylum policy faces mounting criticism from Senate and House representatives concerned by reports that migrants in the program have been robbed, beaten and sexually assaulted in Mexico. Los Angeles Times

Local activists are calling on the Stanislaus County Sheriff’s Department to stop cooperating with Immigration and Customs Enforcement. According to the sheriff, 38 people in custody were turned over to ICE in the first nine months of this year. Modesto Bee

After the Trump impeachment hearings, both sides scramble: As Congress left for a long Thanksgiving break, there was no sign that the damaging testimony had swayed Republican lawmakers to support impeaching the president. Los Angeles Times

A San Francisco “vacancy tax” is headed to the March ballot. The measure is intended to fight empty storefronts in the city’s shopping districts. San Francisco Chronicle

Critics say that a Cal State University proposal to require a fourth year of math-related coursework for admission would unfairly block black and Latino students from the system. At the heart of the debate are questions about educational access for the hundreds of thousands of students who apply to and attend the nation’s largest public four-year university system. Los Angeles Times

HEALTH AND THE ENVIRONMENT

In the latest round of outages, PG&E shut off power to far fewer than anticipated, and restoration has already begun. In all, about 150,000 people in 11 counties — including Butte, Colusa, Glenn, Lake, Mendocino and Napa — lost power. Los Angeles Times

Where did former Paradise residents go after the devastating a Camp fire? A new analysis offers a sweeping look at displacement after the catastrophic fire. Sacramento Bee

Winter may not officially be here, but snow is falling at ski resorts from Southern California to Mammoth Lakes and the Lake Tahoe area. The first snow of the season brought several inches to L.A.-area resorts. Mammoth Mountain picked up an inch of new snow with the promise of more on the way. Los Angeles Times

It’s USC-UCLA rivalry week, as the two universities’ football teams meet Saturday. But for the first time, the Daily Trojan and Daily Bruin are collaborating on an all-football preview issue. Los Angeles Times

The SuperShuttle airport ride service suspended operations Thursday at Los Angeles International Airport and other California sites for being out of compliance with state insurance requirements. Los Angeles Times

“My parents met on a blind date at Ocean Park in Santa Monica in December 1946. They were actually paired up with other people, but Dad took one look at Mom, pointed and said, ‘You’re coming with me!’ Mom protested at first, but they ended up walking the pier together, where they laughed, joked and sang wartime ballads to each other. When Dad drove Mom home, she spontaneously sat in his lap with her arms around him. This got them pulled over, and the patrolman asked, ‘Who’s driving the car, you or him?’ My folks were married for 63 years.”

If you have a memory or story about the Golden State, share it with us. (Please keep your story to 100 words.)

Please let us know what we can do to make this newsletter more useful to you. Send comments, complaints, ideas and unrelated book recommendations to Julia Wick. Follow her on Twitter @Sherlyholmes.

50 Great Gadget and Gear Gifts for the Holidays

US Navy base shooting: 4 dead including gunman at Florida base | USA News

Border-crosser who claimed to be hauling towels actually had 120 kg of opium: authorities